Perfetto is a production-grade open-source stack for performance instrumentation and trace analysis. It offers services and libraries for recording system-level and app-level traces, native + java heap profiling, a library for analyzing traces using SQL and a web-based UI to visualize and explore multi-GB traces.

At its core, Perfetto introduces a novel userspace-to-userspace tracing protocol based on direct protobuf serialization onto a shared memory buffer. The tracing protocol is used both internally for the built-in data sources and exposed to C++ apps through the Tracing SDK and the Track Event Library.

System-wide tracing on Android and Linux

On Linux and Android, Perfetto bundles a number of data sources that are able to gather detailed performance data from different system interfaces. For the full sets and details see the Data Sources section of the documentation. Some examples:

The Perfetto Tracing SDK enables C++ developers to enrich traces with app-specific trace points. You can choose between the flexibility of defining your own strongly-typed events and creating custom data sources or using the easier-to-use Track Event Library which allows to easily create time-bounded slices, counters and time markers using annotations of the form TRACE_EVENT("category", "event_name", "x", "str", "y", 42).

The SDK is designed for tracing of multi-process systems and multi-threaded processes. It is based on ProtoZero, a library for direct writing of protobuf events on thread-local shared memory buffers.

The same code can work both in fully-in-process mode, hosting an instance of the Perfetto tracing service on a dedicated thread, or in system mode, connecting to the Linux/Android tracing daemon through a UNIX socket, allowing to combine app-specific instrumentation points with system-wide tracing events.

The SDK is based on portable C++11 code tested with the major C++ sanitizers (ASan, TSan, MSan, LSan). It doesn't rely on run-time code modifications or compiler plugins.

Perfetto has been designed from the grounds to replace the internals of the chrome://tracing infrastructure. Tracing in Chromium and its internals are based on Perfetto's codebase on all major platforms (Android, CrOS, Linux, MacOS, Windows). The same service-based architecture of system-wide tracing applies, but internally the Chromium Mojo IPC system is used instead of Perfetto's own UNIX socket.

By default tracing works in in-process mode in Chromium, recording only data emitted by Chromium processes. On Android (and on Linux, if disabling the Chromium sandbox) tracing can work in hybrid in-process+system mode, combining chrome-specific trace events with Perfetto system events.

Trace Processor is a portable C++11 library that provides column-oriented table storage, designed ad-hoc for efficiently holding hours of trace data into memory and exposes a SQL query interface based on the popular SQLite query engine. The trace data model becomes a set of SQL tables which can be queried and joined in extremely powerful and flexible ways to analyze the trace data.

On top of this, Trace Processor includes also a trace-based metrics subsystem consisting of pre-baked and extensible queries that can output strongly-typed summaries about a trace in the form of JSON or protobuf messages (e.g., the CPU usage at different frequency states, breakdown by process and thread).

Trace-based metrics allow an easy integration of traces in performance testing scenarios or batch analysis or large corpuses of traces.

The Perfetto UI works fully offline after it has been opened once. Traces opened with the UI are processed locally by the browser and do not require any server-side interaction. 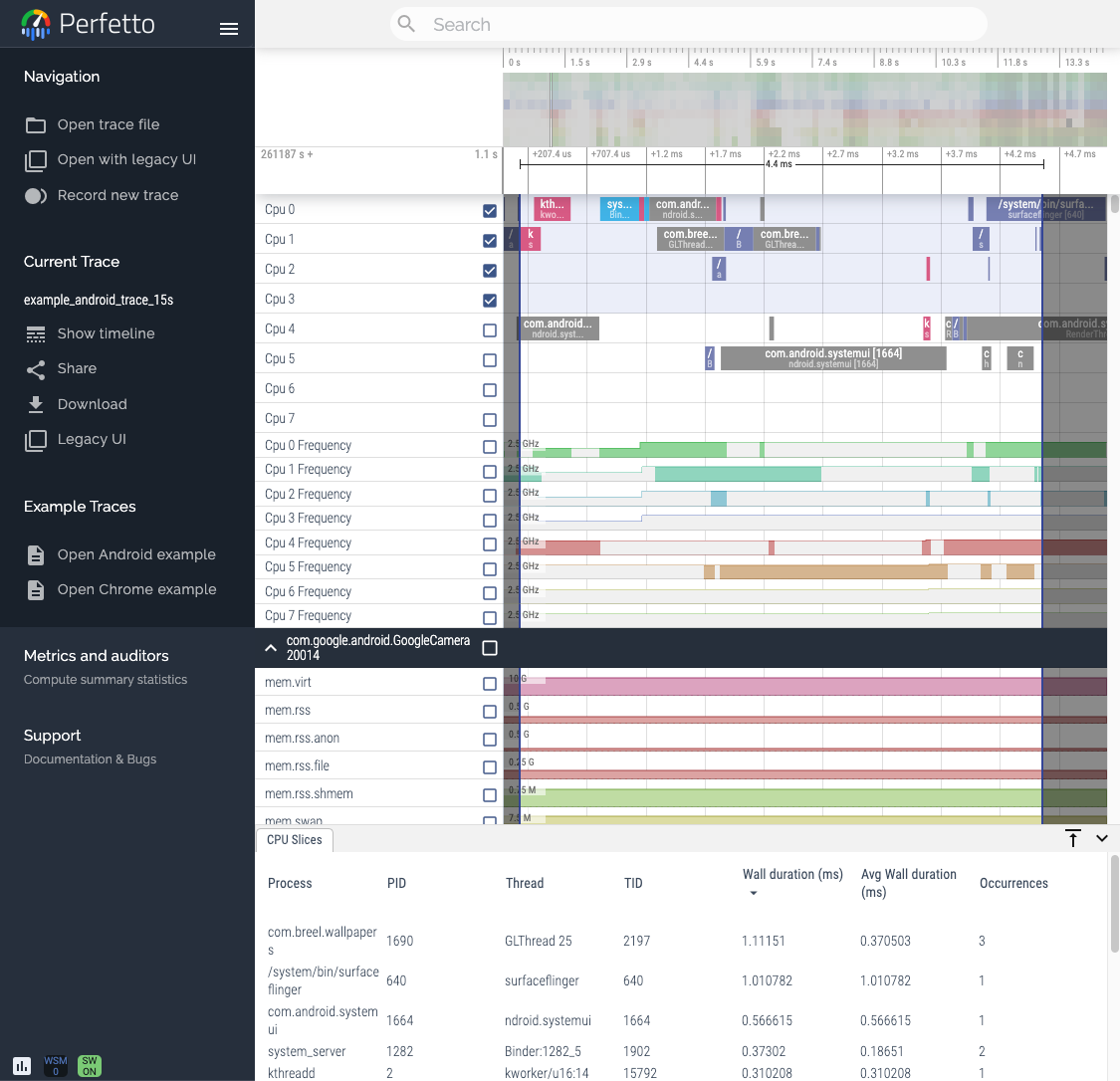 See the Contributing -> Getting started page.

For bugs affecting Android or the tracing internals: