Perfetto allows to gather a number of memory events and counters on Android and Linux. These events come from kernel interfaces, both ftrace and /proc interfaces, and are of two types: polled counters and events pushed by the kernel in the ftrace buffer.

See man 5 proc for their semantic.

To collect process stat counters every X ms set proc_stats_poll_ms = X in your process stats config. X must be greater than 100ms to avoid excessive CPU usage. Details about the specific counters being collected can be found in the ProcessStats reference.

Recent versions of the Linux kernel allow to report ftrace events when the Resident Set Size (RSS) mm counters change. This is the same counter available in /proc/pid/status as VmRSS. The main advantage of this event is that by being an event-driven push event it allows to detect very short memory usage bursts that would be otherwise undetectable by using /proc counters.

Memory usage peaks of hundreds of MB can have dramatically negative impact on Android, even if they last only few ms, as they can cause mass low memory kills to reclaim memory.

The kernel feature that supports this has been introduced in the Linux Kernel in b3d1411b6 and later improved by e4dcad20. They are available in upstream since Linux v5.5-rc1. This patch has been backported in several Google Pixel kernels running Android 10 (Q).

mm_event is an ftrace event that captures statistics about key memory events (a subset of the ones exposed by /proc/vmstat). Unlike RSS-stat counter updates, mm events are extremely high volume and tracing them individually would be unfeasible. mm_event instead reports only periodic histograms in the trace, reducing sensibly the overhead.

mm_event is available only on some Google Pixel kernels running Android 10 (Q) and beyond.

When mm_event is enabled, the following mm event types are recorded:

For each event type, the event records:

At the SQL level, these events are imported and exposed in the same way as the corresponding polled events. This allows to collect both types of events (pushed and polled) and treat them uniformly in queries and scripts.

This data source allows periodic polling of system data from:

See man 5 proc for their semantic.

The set of supported counters is available in the TraceConfig reference

The Android framework kills apps and services, especially background ones, to make room for newly opened apps when memory is needed. These are known as low memory kills (LMK).

Note LMKs are not always the symptom of a performance problem. The rule of thumb is that the severity (as in: user perceived impact) is proportional to the state of the app being killed. The app state can be derived in a trace from the OOM adjustment score.

A LMK of a foreground app or service is typically a big concern. This happens when the app that the user was using disappeared under their fingers, or their favorite music player service suddenly stopped playing music.

A LMK of a cached app or service, instead, is frequently business-as-usual and in most cases won't be noticed by the end user until they try to go back to the app, which will then cold-start.

The situation in between these extremes is more nuanced. LMKs of cached apps/service can be still problematic if it happens in storms (i.e. observing that most processes get LMK-ed in a short time frame) and are often the symptom of some component of the system causing memory spikes.

In Android, LMK used to be handled by an ad-hoc kernel-driver, Linux's drivers/staging/android/lowmemorykiller.c. This driver uses to emit the ftrace event lowmemorykiller/lowmemory_kill in the trace.

Android 9 introduced a userspace native daemon that took over the LMK responsibility: lmkd. Not all devices running Android 9 will necessarily use lmkd as the ultimate choice of in-kernel vs userspace is up to the phone manufacturer, their kernel version and kernel config.

LMKs on Android, whether the old in-kernel lowmemkiller or the newer lmkd, use a completely different mechanism than the standard Linux kernel's OOM Killer. Perfetto at the moment supports only Android LMK events (Both in-kernel and user-space) and does not support tracing of Linux kernel OOM Killer events. Linux OOMKiller events are still theoretically possible on Android but extremely unlikely to happen. If they happen, they are more likely the symptom of a mis-configured BSP.

Newer userspace LMKs are available in the UI under the lmkd track in the form of a counter. The counter value is the PID of the killed process (in the example below, PID=27985). 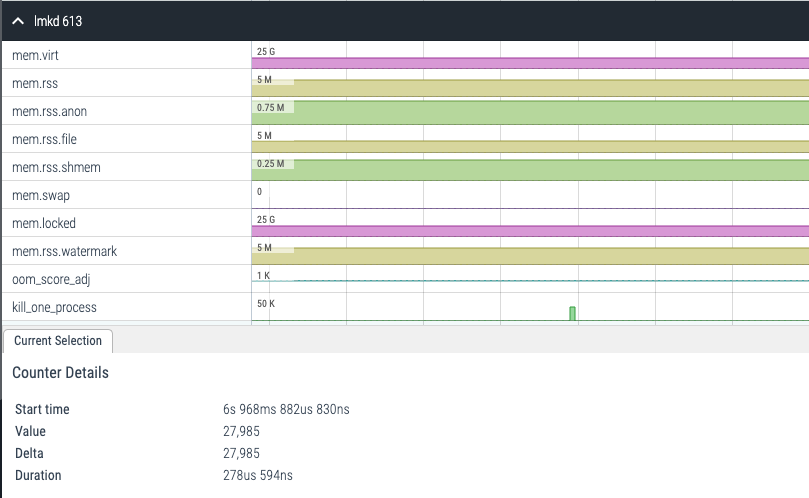 TODO: we are working on a better UI support for LMKs.

Both newer lmkd and legacy kernel-driven lowmemorykiller events are normalized at import time and available under the mem.lmk key in the instants table.

The Android app state can be inferred in a trace from the process oom_score_adj. The mapping is not 1:1, there are more states than oom_score_adj value groups and the oom_score_adj range for cached processes spans from 900 to 1000.

The mapping can be inferred from the ActivityManager's ProcessList sources