Unlike many always-on logging systems (e.g. Linux's rsyslog, Android's logcat), in Perfetto all tracing data sources are idle by default and record data only when instructed to do so.

Data sources record data only when one (or more) tracing sessions are active. A tracing session is started by invoking the perfetto cmdline client and passing a config (see QuickStart guide for Android, Linux, or Chrome on desktop).

And is used as follows:

TIP: Some more complete examples of trace configs can be found in the repo in /test/configs/.

NOTE: If you are tracing on Android using adb and experiencing problems, see the Android section below.

The TraceConfig is a protobuf message (reference docs) that defines:

The tracing service (traced) acts as a configuration dispatcher: it receives a config from the perfetto cmdline client (or any other Consumer) and forwards parts of the config to the various Producers connected.

When a tracing session is started by a consumer, the tracing service will: 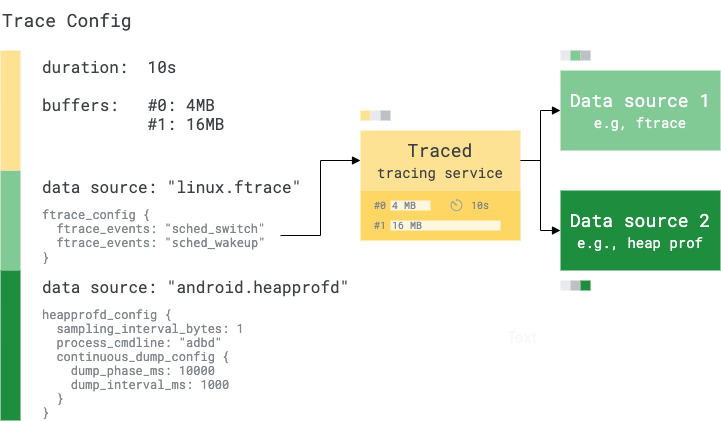 The buffer sections define the number, size and policy of the in-memory buffers owned by the tracing service. It looks as follows:

Each buffer has a fill policy which is either:

WARNING: DISCARD can have unexpected side-effect with data sources that commit data at the end of the trace.

A trace config must define at least one buffer to be valid. In the simplest case all data sources will write their trace data into the same buffer.

While this is fine for most basic cases, it can be problematic in cases where different data sources write at significantly different rates.

For instance, imagine a trace config that enables both:

Data-source <> buffer mappings are dynamic in Perfetto. In the simplest case a tracing session can define only one buffer. By default, all data sources will record data into that one buffer.

In cases like the example above, it might be preferable separating these data sources into different buffers. This can be achieved with the target_buffer field of the TraceConfig.

Can be achieved with:

There are two ways to pass the trace config when using the perfetto cmdline client format:

It is the preferred format for human-driven workflows and exploration. It allows to pass directly the text file in the PBTX (ProtoBuf TeXtual representation) syntax, for the schema defined in the trace_config.proto (see reference docs)

When using this mode pass the --txt flag to perfetto to indicate the config should be interpreted as a PBTX file:

NOTE: The --txt option has been introduced only in Android 10 (Q). Older versions support only the binary format.

WARNING: Do not use the text format for machine-to-machine interaction benchmark, scripts and tools) as it's more prone to breakages (e.g. if a field is renamed or an enum is turned into an integer)

It is the preferred format for machine-to-machine (M2M) interaction. It involves passing the protobuf-encoded binary of the TraceConfig message. This can be obtained passing the PBTX in input to the protobuf's protoc compiler (which can be downloaded here).

and then passing it to perfetto as follows, without the --txt argument:

By default Perfetto keeps the full trace buffer(s) in memory and writes it into the destination file (the -o cmdline argument) only at the end of the tracing session. This is to reduce the perf-intrusiveness of the tracing system. This, however, limits the max size of the trace to the physical memory size of the device, which is often too limiting.

In some cases (e.g., benchmarks, hard to repro cases) it is desirable to capture traces that are way larger than that, at the cost of extra I/O overhead.

To achieve that, Perfetto allows to periodically write the trace buffers into the target file (or stdout) using the following TraceConfig fields:

For a complete example of a working trace config in long-tracing mode see /test/configs/long_trace.cfg.

Summary: to capture a long trace just set write_into_file:true, set a long duration_ms and use an in-memory buffer size of 32MB or more.

Alongside the trace-wide configuration parameters, the trace config also defines data-source-specific behaviors. At the proto schema level, this is defined in the DataSourceConfig section of TraceConfig:

Fields like ftrace_config, android_power_config are examples of data-source specific configs. The tracing service will completely ignore the contents of those fields and route the whole DataSourceConfig object to any data source registered with the same name.

The [lazy=true] marker has a special implication in the protozero code generator. Unlike standard nested messages, it generates raw accessors (e.g., const std::string& ftrace_config_raw() instead of const protos::FtraceConfig& ftrace_config()). This is to avoid injecting too many #include dependencies and avoiding binary size bloat in the code that implements data sources.

A note on backwards/forward compatibility

TODO: we are aware of the fact that today extending the DataSourceConfig with a custom proto requires changing the data_source_config.proto in the Perfetto repo, which is unideal for external projects. The long-term plan is to reserve a range of fields for non-upstream extensions and provide generic templated accessors for client code. Until then, we accept patches upstream to introduce ad-hoc configurations for your own data sources.

Some data sources are singletons. E.g., in the case of scheduler tracing that Perfetto ships on Android, there is only data source for the whole system, owned by the traced_probes service.

However, in the general case multiple processes can advertise the same data source. This is the case, for instance, when using the Perfetto SDK for userspace instrumentation.

If this happens, when starting a tracing session that specifies that data source in the trace config, Perfetto by default will ask all processes that advertise that data source to start it.

In some cases it might be desirable to further limit the enabling of the data source to a specific process (or set of processes). That is possible through the producer_name_filter and producer_name_regex_filter.

When those filters are set, the Perfetto tracing service will activate the data source only in the subset of producers matching the filter.

Perfetto supports an alternative mode of either starting or stopping the trace which is based on triggers. The overall idea is to declare in the trace config itself:

Why using triggers? Why can't one just start perfetto or kill(SIGTERM) it when needed? The rationale of all this is the security model: in most Perfetto deployments (e.g., on Android) only privileged entities (e.g., adb shell) can configure/start/stop tracing. Apps are unprivileged in this sense and they cannot control tracing.

Triggers offer a way to unprivileged apps to control, in a limited fashion, the lifecycle of a tracing session. The conceptual model is:

Triggers can be signaled via the cmdline util

(or also by starting an independent trace session which uses only the activate_triggers: "trigger_name" field in the config)

There are two types of triggers:

Start triggers allow activating a tracing session only after some significant event has happened. Passing a trace config that has START_TRACING trigger causes the tracing session to stay idle (i.e. not recording any data) until either the trigger is hit or the trigger_timeout_ms timeout is hit.

trace_duration_ms and triggered traces can not be used at the same time.

STOP_TRACING triggers allow to prematurely finalize a trace when the trigger is hit. In this mode the trace starts immediately when the perfetto client is invoked (like in nominal cases). The trigger acts as a premature finalization signal.

This can be used to use perfetto in flight-recorder mode. By starting a trace with buffers configured in RING_BUFFER mode and STOP_TRACING triggers, the trace will be recorded in a loop and finalized when the culprit event is detected. This is key for events where the root cause is in the recent past (e.g., the app detects a slow scroll or a missing frame).

On Android, there are some caveats around using adb shell