Using a shared memory buffer between the client and heapprofd removes the need to drain the socket as fast as possible in the service, which we needed previously to make sure we do not block the client's malloc calls. This allows us to simplify the threading design of heapprofd.

The Main Thread has the Perfetto producer connection to traced, and handles incoming client connections for /dev/socket/heapprofd. It executes the logic for finding processes matching an incoming TraceConfig, matching processes to client configurations, and does the handshake with the clients. During this handshake the shared memory buffer is created by the service. After the handshake is done, the socket for a client is handed off to a particular Unwinder Thread.

After the handshake is completed, the sockets are handled by the assigned Unwinder Thread's eventloop. The unwinder thread owns the metadata required for unwinding (the /proc/pid/{mem,maps} FDs, derived libunwindstack objects and the shared memory buffer). When data is received on the signaling socket, the Unwinding Thread unwinds the callstack provided by the client and posts a task to the Main Thread to apply to bookkeeping. This is repeated until no more records are pending in the buffer.

At every point in time, every object is owned by exactly one thread. No references or pointers are shared between different threads.

Unwinder Thread, for each process:

Refer to the following phases in the sequence diagram below:

The Main Thread receives a TracingConfig from traced containing a HeapprofdConfig. It adds the processes expected to connect, and their ClientConfiguration to the ProcessMatcher. It then finds matching processes (by PID or cmdline) and sends the heapprofd RT signal to trigger initialization.

The processes receiving this configuration connect to /dev/socket/heapprofd and sends /proc/self/{map,mem} fds. The Main Thread finds the matching configuration in the ProcessMatcher, creates a new shared memory buffer, and sends the two over the signaling socket. The client uses those to finish initializing its internal state. The Main Thread hands off (RemoveFiledescriptorWatch + AddFiledescriptorWatch) the signaling socket to an Unwinding Thread. It also hands off the ScopedFiles for the /proc fds. These are used to create UnwindingMetadata.

Now that the handshake is done, all communication is between the Client and its corresponding Unwinder Thread.

For every malloc, the client decides whether to sample the allocation, and if it should, write the AllocMetadata + raw stack onto the shared memory buffer, and then sends a byte over the signaling socket to wake up the Unwinder Thread. The Unwinder Thread uses DoUnwind to get an AllocRecord (metadata like size, address, etc + a vector of frames). It then posts a task to the Main Thread to apply this to the bookkeeping.

A dump request can be triggered by two cases:

Both of these cases are handled the same way. The Main Thread dumps the relevant processes' bookkeeping and flushes the buffers to traced.

traced sends a StopDataSource IPC. The Main Thread posts a task to the Unwinder Thread to ask it to disconnect from the client. It unmaps the shared memory, closes the memfd, and then closes the signaling socket.

The client receives an EPIPE on the next attempt to send data over that socket, and then tears down the client. 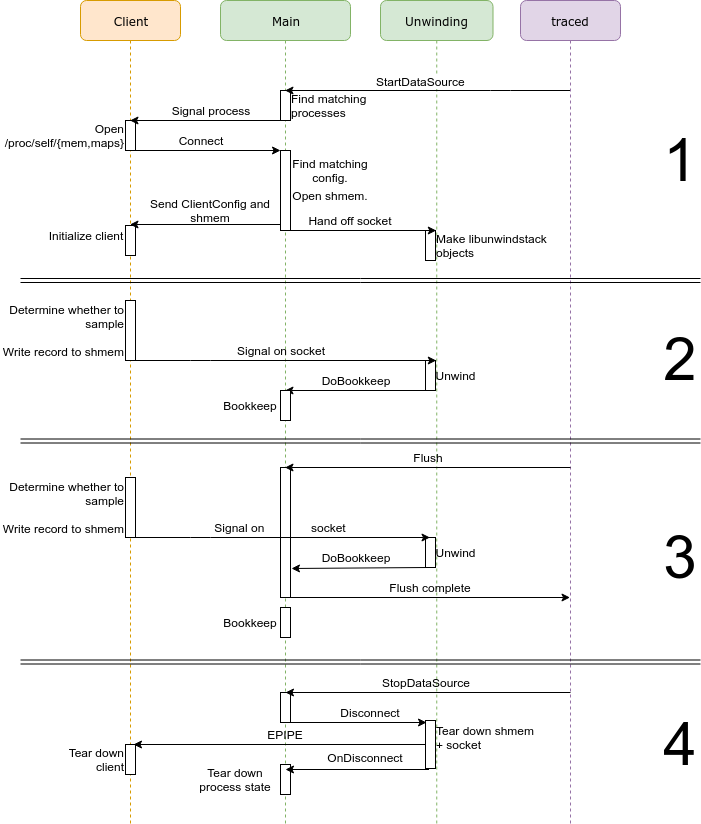 We need to be careful about which operation we use to copy the callstack to the shared memory buffer, as memcpy(3) can crash on the stack frame guards due to source hardening.