A frame is said to be janky if the time the frame was presented on screen does not match the predicted present time given by the scheduler.

A jank can cause:

FrameTimeline is a module within SurfaceFlinger that detects janks and reports the source of the jank. SurfaceViews are currently not supported, but will be, in future.

Two new tracks are added for every application that had at least one frame on screen. 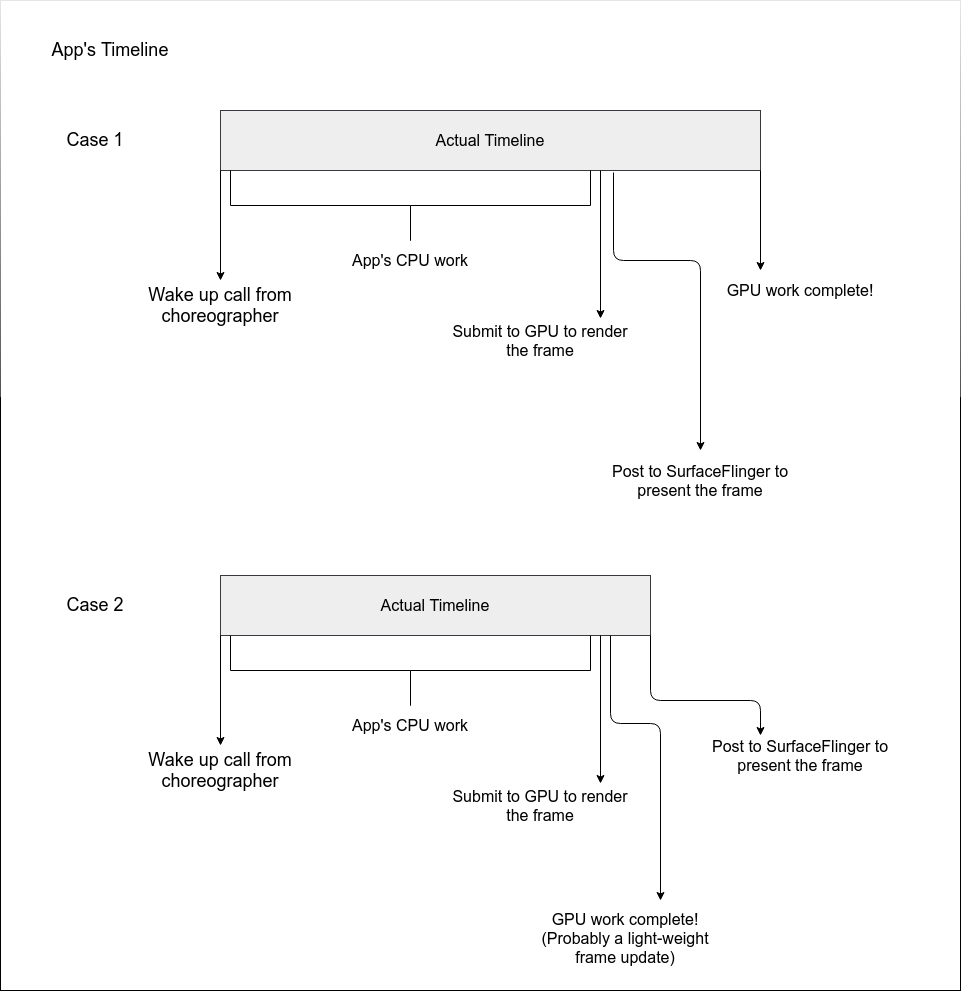 Similarly, SurfaceFlinger also gets these two new tracks representing the expected time it's supposed to finish within, and the actual time it took to finish compositing frames and presenting on-screen. Here, SurfaceFlinger's work represents everything underneath it in the display stack. This includes the Composer and the DisplayHAL. So, the slices represent SurfaceFlinger main thread's start to on-screen update.

The names of the slices represent the token received from choreographer. You can compare a slice in the actual timeline track to its corresponding slice in the expected timeline track to see how the app performed compared to the expectations. In addition, for debugging purposes, the token is added to the app's doFrame and RenderThread slices. For SurfaceFlinger, the same token is shown in onMessageReceived. 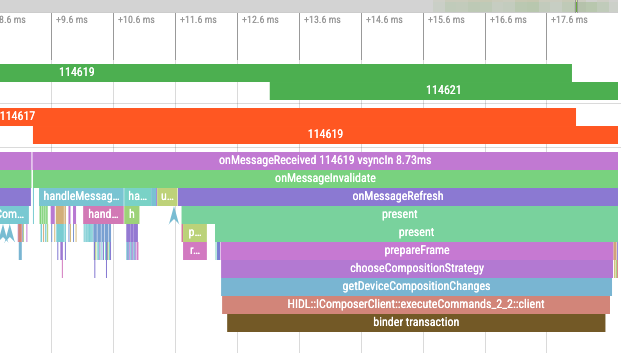 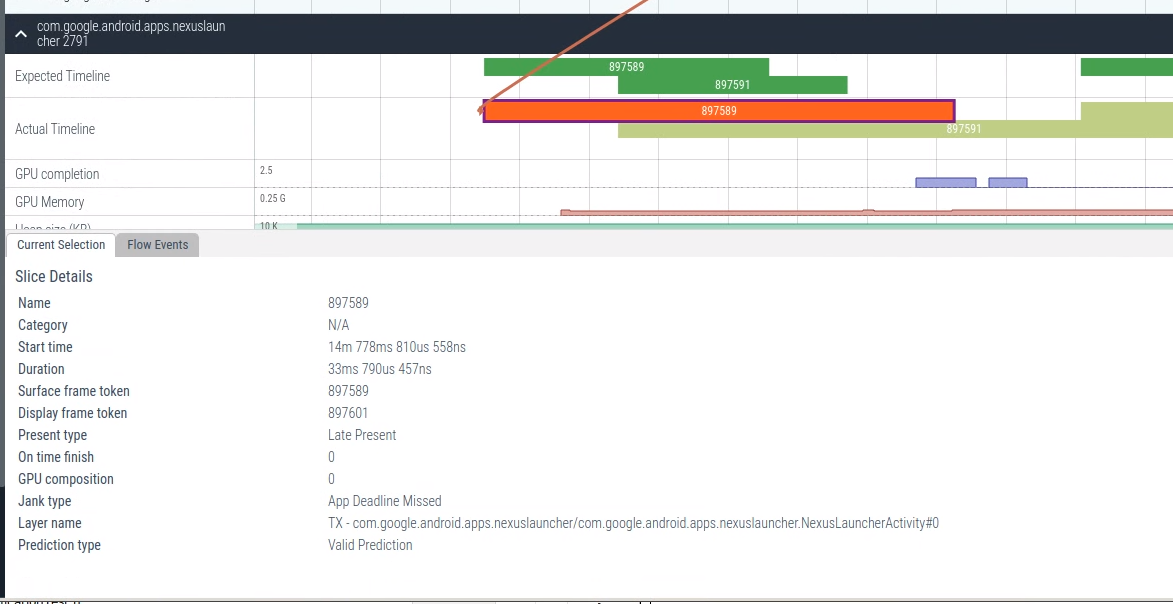 The selection details provide more information on what happened with the frame. These include:

Was the frame early, on time or late.

Did the application finish its work for the frame on time?

Was there a jank observed with this frame? If yes, this shows what type of jank was observed. If not, the type would be None.

Did the prediction expire by the time this frame was received by FrameTimeline? If yes, this will say Expired Prediction. If not, Valid Prediction.

Boolean that tells if the frame was composited by the GPU or not.

Name of the Layer/Surface to which the frame was presented. Some processes update frames to multiple surfaces. Here, multiple slices with the same token will be shown in the Actual Timeline. Layer Name can be a good way to disambiguate between these slices.

Boolean that tells if the frame corresponds to a buffer or an animation. 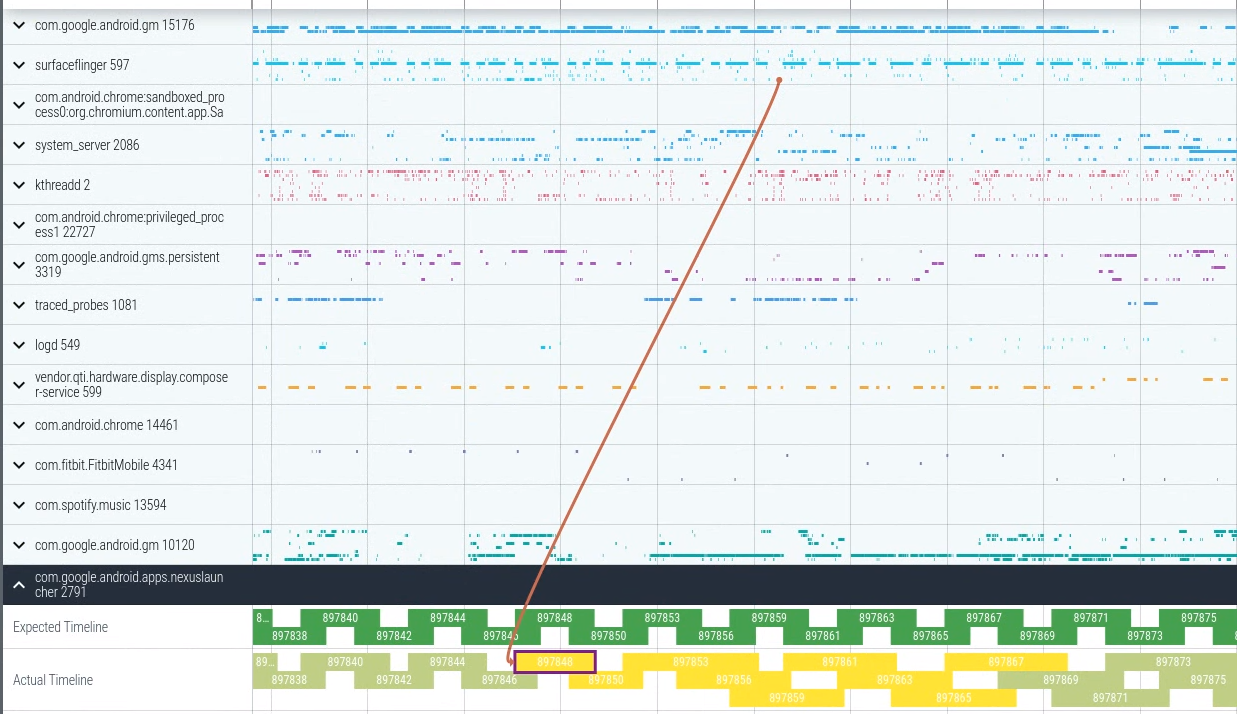 Since SurfaceFlinger can composite frames from multiple layers into a single frame-on-screen (called a DisplayFrame), selecting a DisplayFrame draws arrows to all the frames that were composited together. This can span over multiple processes. 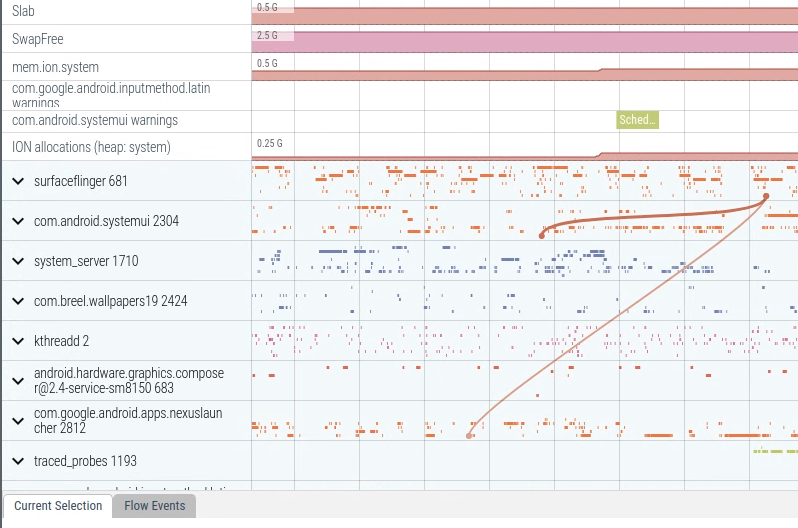 The jank types are defined in JankInfo.h. Since each app is written differently, there is no common way to go into the internals of the apps and specify what the reason for the jank was. Our goal is not to do this but rather, provide a quick way to tell if app was janky or if SurfaceFlinger was janky.

All good. No jank with the frame. The ideal state that should be aimed for.

The app ran longer than expected causing a jank. The total time taken by the app frame is calculated by using the choreographer wake-up as the start time and max(gpu, post time) as the end time. Post time is the time the frame was sent to SurfaceFlinger. Since the GPU usually runs in parallel, it could be that the gpu finished later than the post time.

This is more of a state than a jank. This happens if the app keeps sending new frames to SurfaceFlinger before the previous frame was even presented. The internal Buffer Queue is stuffed with buffers that are yet to be presented, hence the name, Buffer Stuffing. These extra buffers in the queue are presented only one after the other thus resulting in extra latency. This can also result in a stage where there are no more buffers for the app to use and it goes into a dequeue blocking wait. The actual duration of work performed by the app might still be within the deadline, but due to the stuffed nature, all the frames will be presented at least one vsync late no matter how quickly the app finishes its work. Frames will still be smooth in this state but there is an increased input latency associated with the late present.

There are two ways SurfaceFlinger can composite frames.

An important thing to note is that performing device composition happens as a blocking call on the main thread. However, GPU composition happens in parallel. SurfaceFlinger performs the necessary draw calls and then hands over the gpu fence to the display device. The display device then waits for the fence to be signaled, and then presents the frame.

The time taken by SurfaceFlinger’s main thread on the CPU + the GPU composition time together were longer than expected. Here, the CPU time would have still been within the deadline but since the work on the GPU wasn’t ready on time, the frame got pushed to the next vsync.

SurfaceFlinger’s scheduler plans ahead the time to present the frames. However, this prediction sometimes drifts away from the actual hardware vsync time. For example, a frame might have predicted present time as 20ms. Due to a drift in estimation, the actual present time of the frame could be 23ms. This is called a Prediction Error in SurfaceFlinger’s scheduler. The scheduler corrects itself periodically, so this drift isn’t permanent. However, the frames that had a drift in prediction will still be classified as jank for tracking purposes.

Isolated prediction errors are not usually perceived by the user as the scheduler is quick to adapt and fix the drift.

As the name suggests, the reason for the jank is unknown in this case. An example here would be that SurfaceFlinger or the App took longer than expected and missed the deadline but the frame was still presented early. The probability of such a jank happening is very low but not impossible.

At the SQL level, frametimeline data is available in two tables