This page describes the dataflow in Perfetto when recording traces. It describes all the buffering stages, explains how to size the buffers and how to debug data losses.

Tracing in Perfetto is an asynchronous multiple-writer single-reader pipeline. In many senses, its architecture is very similar to modern GPUs' command buffers.

The design principles of the tracing dataflow are:

In the general case, there are two types buffers involved in a trace. When pulling data from the Linux kernel's ftrace infrastructure, there is a third stage of buffering (one per-CPU) involved: 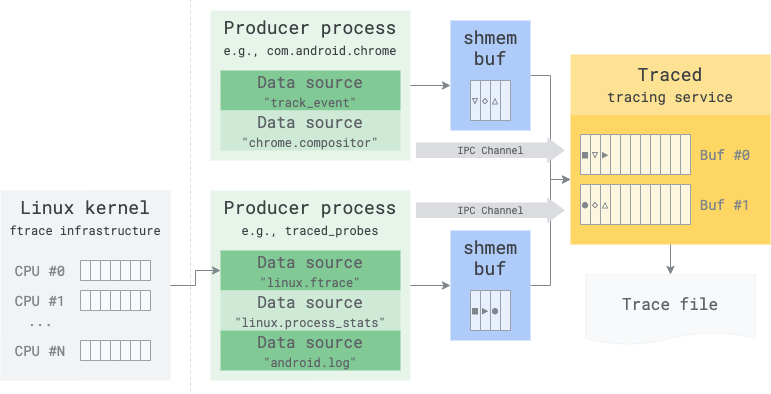 These buffers (yellow, in the picture above) are defined by the user in the buffers section of the trace config. In the most simple cases, one tracing session = one buffer, regardless of the number of data sources and producers.

This is the place where the tracing data is ultimately kept, while in memory, whether it comes from the kernel ftrace infrastructure, from some other data source in traced_probes or from another userspace process using the Perfetto SDK. At the end of the trace (or during, if in streaming mode) these buffers are written into the output trace file.

These buffers can contain a mixture of trace packets coming from different data sources and even different producer processes. What-goes-where is defined in the buffers mapping section of the trace config. Because of this, the tracing buffers are not shared across processes, to avoid cross-talking and information leaking across producer processes.

Each producer process has one memory buffer shared 1:1 with the tracing service (blue, in the picture above), regardless of the number of data sources it hosts. This buffer is a temporary staging buffer and has two purposes:

When the linux.ftrace data source is enabled, the kernel will have its own per-CPU buffers. These are unavoidable because the kernel cannot write directly into user-space buffers. The traced_probes process will periodically read those buffers, convert the data into binary protos and follow the same dataflow of userspace tracing. These buffers need to be just large enough to hold data between two ftrace read cycles (TraceConfig.FtraceConfig.drain_period_ms).

Life of a trace packet

Here is a summary to understand the dataflow of trace packets across buffers. Consider the case of a producer process hosting two data sources writing packets at a different rates, both targeting the same central buffer.

The math for sizing the central buffer is quite straightforward: in the default case of tracing without write_into_file (when the trace file is written only at the end of the trace), the buffer will hold as much data as it has been written by the various data sources.

The total length of the trace will be (buffer size) / (aggregated write rate). If all producers write at a combined rate of 2 MB/s, a 16 MB buffer will hold ~ 8 seconds of tracing data.

The write rate is highly dependent on the data sources configured and by the activity of the system. 1-2 MB/s is a typical figure on Android traces with scheduler tracing, but can go up easily by 1+ orders of magnitude if chattier data sources are enabled (e.g., syscall or pagefault tracing).

The sizing of the shared memory buffer depends on:

Empirical measurements suggest that on most Android systems a shared memory buffer size of 128-512 KB is good enough.

The default shared memory buffer size is 256 KB. When using the Perfetto Client Library, this value can be tweaked setting TracingInitArgs.shmem_size_hint_kb.

WARNING: if a data source writes very large trace packets in a single batch, either the shared memory buffer needs to be big enough to handle that or BufferExhaustedPolicy.kStall must be employed.

For instance, consider a data source that emits a 2MB screenshot every 10s. Its (simplified) code, would look like:

Its average write rate is 2MB / 10s = 200 KB/s. However, the data source will create bursts of 2MB back-to-back without yielding; it is limited only by the tracing serialization overhead. In practice, it will write the 2MB buffer at O(GB/s). If the shared memory buffer is < 2 MB, the tracing service will be unlikely to catch up at that rate and data losses will be experienced.

When using the Linux kernel ftrace data source, losses can occur in the kernel -> userspace path if the traced_probes process gets blocked for too long.

At the trace proto level, losses in this path are recorded:

At the TraceProcessor SQL level, this data is available in the stats table:

Tracing data can be lost in the shared memory due to bursts while traced is blocked.

At the trace proto level, losses in this path are recorded:

At the TraceProcessor SQL level, this data is available in the stats table:

Data losses in the central buffer can happen for two different reasons:

At the TraceProcessor SQL level, this data is available in the stats table, one entry per central buffer:

Summary: the best way to detect and debug data losses is to use Trace Processor and issue the query: select * from stats where severity = 'data_loss' and value != 0

A "writer sequence" is the sequence of trace packets emitted by a given TraceWriter from a data source. In almost all cases 1 data source == 1+ TraceWriter(s). Some data sources that support writing from multiple threads typically create one TraceWriter per thread.

In many cases trace packets are fully independent of each other and can be processed and interpreted without further context. In some cases, however, they can have incremental state and behave similarly to inter-frame video encoding techniques, where some frames require the keyframe to be present to be meaningfully decoded.

The /proc entry is emitted only once per process to avoid bloating the size of the trace. In lack of data losses this is fine to be able to reconstruct all scheduling events for that pid. If, however, the process_stats packet gets dropped in the ring buffer, there will be no way left to work out the process details for all the other ftrace events that refer to that PID.

Trace Processor has built-in mechanism that detect loss of interning data and skips ingesting packets that refer to missing interned strings or descriptors.

When using tracing in ring-buffer mode, these types of losses are very likely to happen.

There are two mitigations for this:

Another common problem experienced in traces that involve multiple data sources is the non-synchronous nature of trace commits. As explained in the Life of a trace packet section above, trace data is committed only when a full memory page of the shared memory buffer is filled (or at when the tracing session ends). In most cases, if data sources produce events at a regular cadence, pages are filled quite quickly and events are committed in the central buffers within seconds.

In some other cases, however, a data source can emit events only sporadically. Imagine the case of a data source that emits events when the display is turned on/off. Such an infrequent event might end up being staged in the shared memory buffer for very long times and can end up being committed in the trace buffer hours after it happened.

Another scenario where this can happen is when using ftrace and when a particular CPU is idle most of the time or gets hot-unplugged (ftrace uses per-cpu buffers). In this case a CPU might record little-or-no data for several minutes while the other CPUs pump thousands of new trace events per second.

This causes two side effects that end up breaking user expectations or causing bugs:

The best mitigation for these sort of problems is to specify a flush_period_ms in the trace config (10-30 seconds is usually good enough for most cases), especially when recording long traces.

This will cause the tracing service to issue periodic flush requests to data sources. A flush requests causes the data source to commit the shared memory buffer pages into the central buffer, even if they are not completely full. By default, a flush issued only at the end of the trace.

In case of long traces recorded without flush_period_ms, another option is to pass the --full-sort option to trace_processor_shell when importing the trace. Doing so will disable the windowed sorting at the cost of a higher memory usage (the trace file will be fully buffered in memory before parsing).